Going to the map section in AW. Click on the map Icon.

What can be found? Maps, Scenarios and Presets. Where:

Most of the map-makers use maps and scenarios. Some maps are actually scenarios and only can be played as scenarios. For instance WW i & II, UN, etc. Where parties (teams) are defined and/or one player can have more countries assigned.

You can filter the maps/scenarios/presents you want to have a look at by utilizing the map-filter.

You can also filter the maps by using the following filter options:

Once you decide to create a map, the following window opens with some options and choices to be made.
When you get into the map editor there are two tool bars: the side bar (left hand) with the border, country and city editing tools; and the main menu (top right). There is also a Navigator on the bottom right corner.
Lets go through the Main menu options.

First the Map options (the little map and wheel icon). It is here where you define the settings of the map.
Limit reinforcements to own units only: This option allows to simulate an assignation of particular units to specific players starting in a determined country. How does it work?
Example: I limited the building of Marines to France (in the units editor, more information below) and the building of Destroyers to Germany; so France can build Marines but no Destroyers and Germany can build Destroyers but no Marines. If France takes Germany, it will be able to produce Marines in Berlin but no Destroyers in Hamburg. On the other hand, Germany, if it takes France, will be able to build Destroyers in any French port city but no Marines.
If this option is unchecked and units are limited to particular countries (in unit editor), then any player holding this particular country will be able to produce the units limited to it. If this option is checked, you are basically saying "the units allowed to be produced in a players' home-country can be built in whatever territory this player is holding" (assigning units to a particular player).
Important: Clicking the Save option in these menus is "just" to save the changes you've made. After that, you have to click on the small Diskette in the main menu to save all changes!
Finally, as long as you don't check the "Publish map" option, no other player will be able to see or utilize your map.
A second set of tools are related to Countries and Cities. You can access them through the main menu: the green flag for countries and the star for cities. Or you can simply click on a city to open its specific setting window or with the country the same. 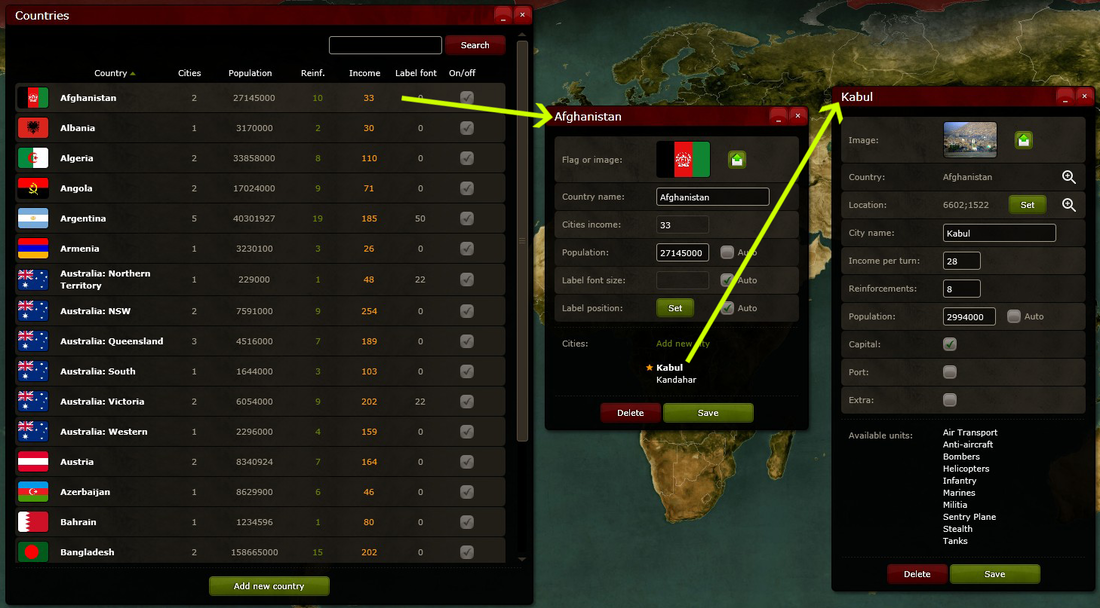 There are two country windows. The first is a complete list of the countries that have been created on the map and you can order the countries by Name, number of cities, population, etc.

The second country window is the one that you can use to change the following items:
Usually the following items are kept automatic or standard: population (better not to change this item, by default it will be the sum of the population of all cities attributed to this country) and label font size and position (better keep it automatic, just moving those country labels that are overlapping cities or city labels).

On the other hand, there is the city window, where you can edit the characteristics of a particular city. Such as:

Finally there is the second city window, which you can access by clicking on the little star in the main menu. It is similar to the country window, showing the list of cities that exist on your map. See below. 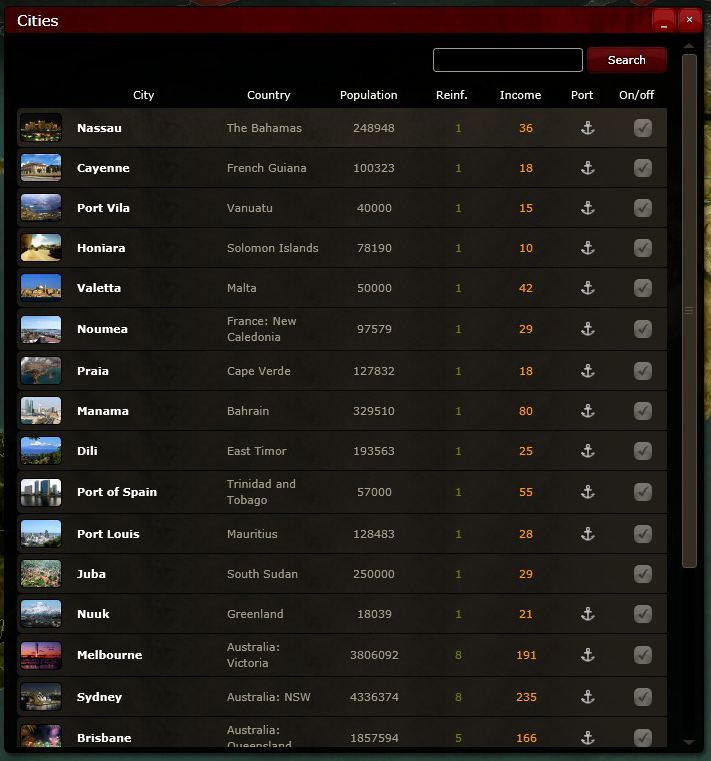 The last major editing tool from the main menu is the Units tab. If you are doing a map from scratch this window will be empty. My suggestion is to click on the "copy default units" tab and to copy them into the list and to start modifying them according to your needs. Just one small comment at this point, you have to keep at least a "Ground: Main defence" and a "Ground: Secondary defence" unit defined, so the map can work accordingly with the reinforcements rate defined in the cities. 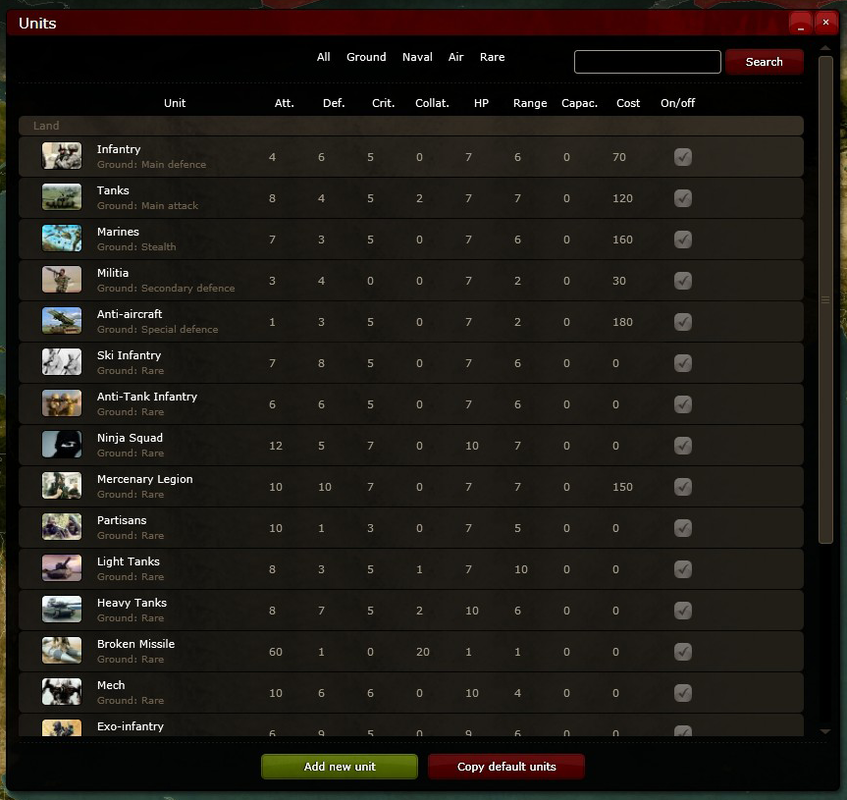 When you click on any of the Units, then the following window will open.
Unit role. The following unit roles are available:
Just try them out, but basically:
Unit characteristics. Coming soon!
Powered by