This article is a reviewed version of Gardevoir's article "ATN - Cartography: The Guide. (Part 1 of 2)" and my own article "CD: Golden Age of Piracy (map and scenario)". It intends to be a guide for map-makers, giving some structure to the process and some useful hints.

[1] Cartography: what it is and its transformation in atWar

"Cartography (from Greek χάρτης khartēs, "map"; and γράφειν graphein, "write") is the study and practice of making maps. Combining science, aesthetics, and technique, cartography builds on the premise that reality can be modeled in ways that communicate spatial information effectively.

The fundamental problems of traditional cartography are to:

In this sense, and according to the critical cartography, maps are always a subjective and power-loaded interpretation of a particular reality. It orders the world into "places" and "no-places", into welt (existence) and unwelt (non-existence). What is not represented on a map, does not exist!
There are different types of maps, that attempt to capture a specific set of features of the territories that are being portrayed. The most common are:

Physical maps
Physical maps show the earth's landforms and bodies of water. The maps use lines, shading, tints, spot elevations, and different colors to show elevation and distinguish the mountains from the lowlands. This kind of map mostly functions as a view of the land surface, including some information on bigger boundaries that divide political entities.

Political maps
Political maps show boundaries that divide one political entity from another, such as townships, counties, cities, and states. Some maps emphasize the boundaries by printing the areas of each political division in different colors, for example world maps usually show each country in a different color. A political map can be made of any area from the local county, municipal levels all the way up to the world level. In general, most maps are political with far fewer being produced as physical maps.

Relief maps
Relief maps are maps that show relief data using contour lines, colors, and/or shading to evidence the elevation. They show topographic features by using shading to simulate the appearance of sunlight and shadows. Steep mountains will have dark shadows, while flat lands will have no shadows.

Road maps
Michelin in France and Gulf Oil in America produced the first road maps to encourage people to travel more, thus consuming more tires and oil. Such maps were usually free until the oil crisis of 1973, when service stations began to charge for their maps. A road map is published primarily to assist travelers in moving from one place to another. Some road maps show only interstate highways, while others show a detailed network of roads, including the back roads.
Some road maps specify distances between various points on the map. Others show various cultural geography features such as colleges and universities, airports, museums, historical sights, and information to make a journey more interesting.

Topographic maps
Topographic maps feature contour lines to portray the shape and elevation of the land. Topo maps render the three-dimensional ups and downs of the terrain on a two-dimensional surface. These maps use "contour lines" (lines of equal elevation) to show elevation. Lines that are close together indicate steep terrain, while lines far apart indicate flat terrain.

Further differences in maps could be fictional and non-fictional maps or maps based on satellite imaging and maps based on drawings (hand-made or by digital means).
Space & Place: how cartography is transformed in atWar

The most important difference between place and space is that the first term is about stability and an ordered configuration of elements, whilst the latter rather implies mobility and has a dynamic character. Place refers to the "proper" order, to the way spatial positions are related in an "objective" account, whilst space is about how we deal with spatiality as a "practiced place". For instance, the geometrical configuration of a city or country can be equated with place, while the act of moving around these cities or countries can be defined as space. So, as place is set and univocal, the notion of space has many meanings as there are walkers.
Both dimensions are constantly influencing each other. Place derives its purpose from a "lifeless" setting. Space, on the other hand, presupposes movement and change, giving a "subjective" meaning to the places it crosses or remains.

In the context of atWar cartography, we can now make a first major differentiation between the place and space dimensions of maps and scenarios. The first one relates to the unchangeable settings of the playing board (land masses and water bodies; borders and cities; incomes and reinforcements; types of units and events; alliances) and the second to the dynamics that evolve when players move around the playing board in pursue of their goals: to defeat the opponent. 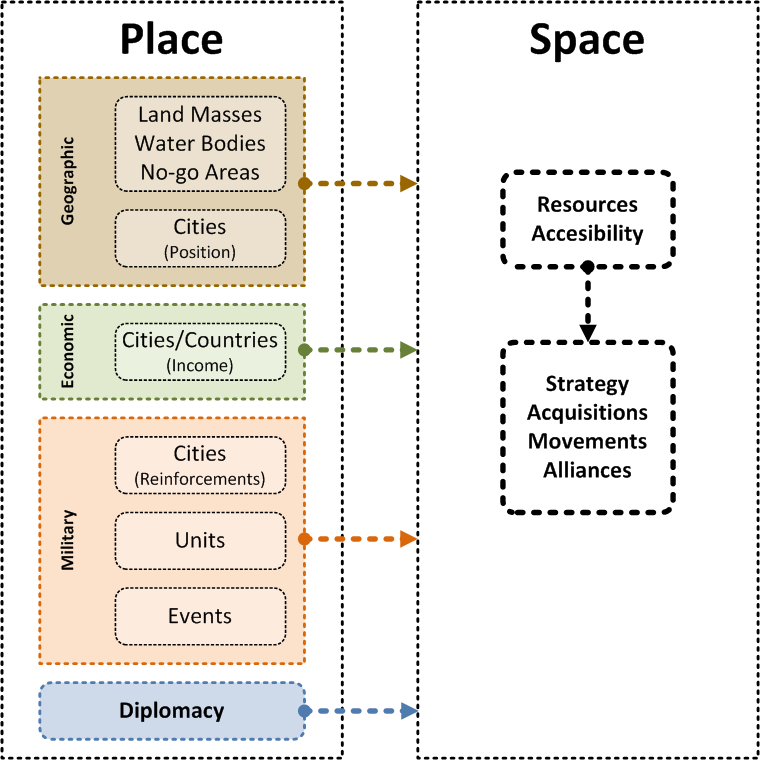 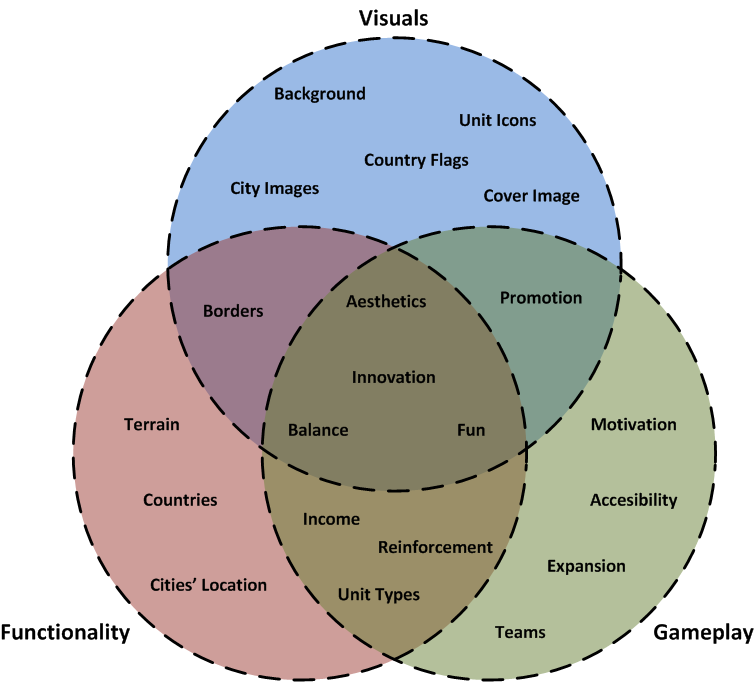 There are a few elements of atWar cartography that have to be considered. Some of them are directly determined by the map-maker and others will derive from the options made.

A ﻿map-maker can determine﻿ the following elements:

These choices will influence the following elements:

Overall, what is being looked at are elements of: 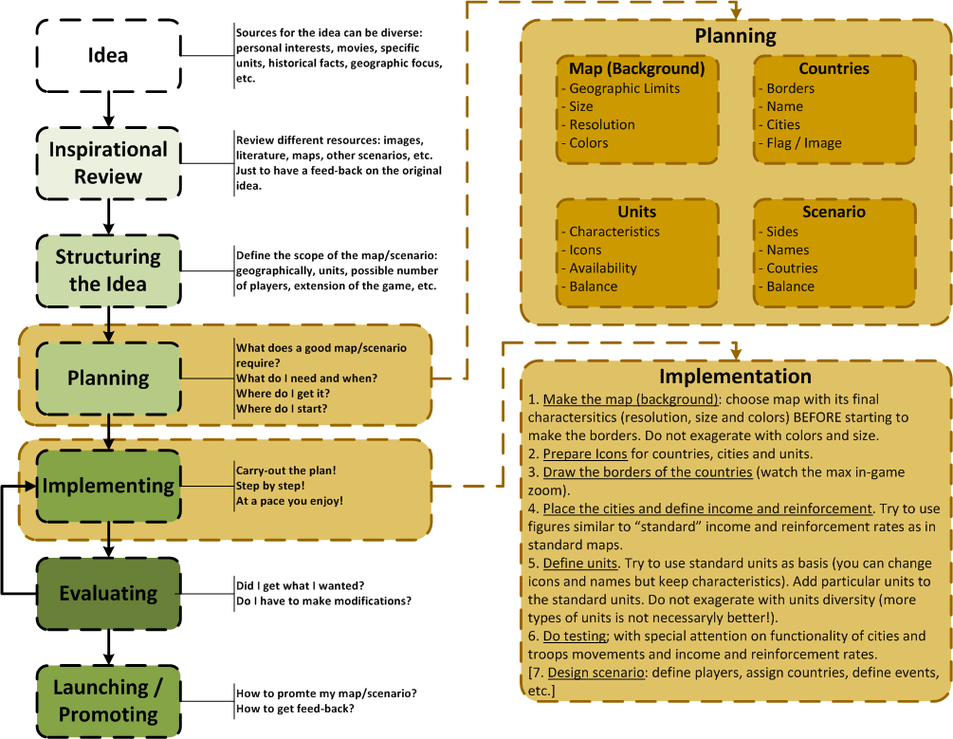